Nancy of MY ANCESTORS AND ME made a suggestion that I should Google the Pittsburgh newspapers to find the death day of Nora O'Donnell Avington nee Dowd to see if I could find her Obit.

I find searching newspapers a daunting and difficult task.   So I tried the collection one by one; what I found something I did not know.   I found her name connected to the death of her son Michael Richard.   I had him listed on my tree as Richard and he was a person that I was unable to find any information about him. 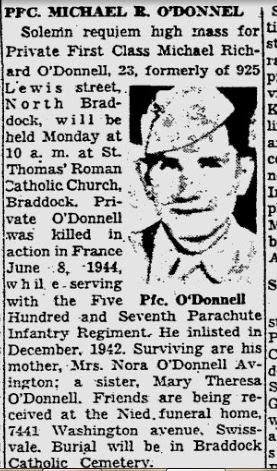 Michael Richard was killed at Normandy on 8 June 1944.   The date of this Obituary was 3 September 1948.    I thought that the troops were buried in Normandy, and how did Nora get him back to the states for burial?   Four years seems a long time to wait  to bury your child.  Michael O'Donnell was my father,Thomas Dowd, first cousin.   His father, also Thomas Dowd, was Nora's brother.


Further research told me he was a medic.  Honor Role 507 Division   You have to scroll down to the bottom of the list.