Posted by Claudia at 6:29 AM No comments:

APRIL WAS A VERY BUSY MONTH

In more than a few ways.   What started as a routine month turned out to be very exciting.   The most exciting to me was two cousins found me.  They were both descendants of two different great grandfathers.   One woman, Erin, lives in the USA and the other, Laura, lives in Germany.

In both cases both of my grandfathers had died untimely, accidental deaths.  I suppose with time, and the sons not being around the information and connection was lost.  On my German line, I have information on three of the six siblings.  I hope in the future one of them will find the names of Frederick Schridde and Meta Hackmann siblings and perhaps a further back with great great grandparents.

On the Irish side, my quest for Bridgets twin sister has been confirmed, I have been searching for her since 2007.   This was rumored and now confirmed, along with four other of Bridgets siblings that also lived in the mill town of  North Braddock PA.  Some of the "mystery" sponsors of Thomas and Bridgets children Baptism are the siblings.     So, the adage of check the sponsors, because they are probably relatives is true.   I just need to find the twin, Katherine Naughton, marriage name.

My Mary Downs, that I found at the Archives, is indeed Bridgets sister.   But, what happened to the six daughters?   I thought the couple May/Michael, disappeared from the face of the earth.  But Erin had found  a couple in Sioux City Iowa, with the same names and fifteen years difference in ago, on the census.   It stated that she was the mother of six with none living.

I had contacted the Diocese of Sioux City and they had no burial record of the Downs daughters.   The Catholic cemetery, All Saints, in North Braddock, had no internments for them between 1896 (when last daughter was born) and 1900, when they were found in Iowa.  More things to ponder.

Yesterday was my day at the Archives and the request pile is getting larger.   There are seven volunteers and yesterday I found out that there are 78 requests. We all routinely go in one day a week, when you volunteer you make your own hours. I, and some of the others, also put in another day of research  I think the deluge of requests is because of the recent interest in Genealogy and the shows on TV.

I was speaking to a librarian and they said that about three hundred fifty hours of research goes into the making of one of the shows.  The problem with  the shows is that it seems like you can call the library and ask them to get all of your information, put it in a folder and all you have to do it pick it up.

Yesterday I did work for three clients, so I guess it is now down to 75 and then I have to add in the number of request that arrived yesterday.

People complain that they are charged for the search,  well  I will tell all and let others know that the money you send goes to maintaining the Archives and the old books that are falling apart.   They need to be restored and rebound and the cost is not cheap.    Why is it that people want everything for nothing?

NEW INFORMATION TO DWELL UPON

In the past week two cousins have found me.   One was a surprise but two was really a surprise.One is related to my fathers line and one to my mothers.   It is amazing that with the availability of email, blogs and internet searches that you can come up with your unknown family.

I think the reason why they were unknown had to do with the death of both my grandfathers.  Both of them from accidents and with their passing the communication between families just ceased to be after a short period of time.   I am glad they both found me because their knowledge will fill in the blanks.   Both of the woman have just recently begun their searches, and I can help them along their way.

First thing I found is that Bridget Naughton Dowd really did have a twin, her name was Catherine/Katherine and  there were more Naughton siblings.   I have to get started on the death certificate search and send for them.

With my mystery of Michael and Maria  Dowd Downes and the disappearance of them and the six daughters has gotten interesting.  I found them in the 1900 Iowa census living in Sioux City, but just the parents and the chilling thing was that it was listed as parents of six and zero children living.   Michael and Maria were about fifteen years apart in age and the Iowa couple fits age wise.   Thanks to my cousin to point this couple out.

I contacted the cemetery where most the family is buried and none of the girls are buried there.  My theory that something tragic happened is proving to be true.   Now, I contacted the Diocese of Sioux City and they are going to do a search for me.     Next I need to check the resources from Iowa and see what I can find.
Posted by Claudia at 2:58 PM No comments: 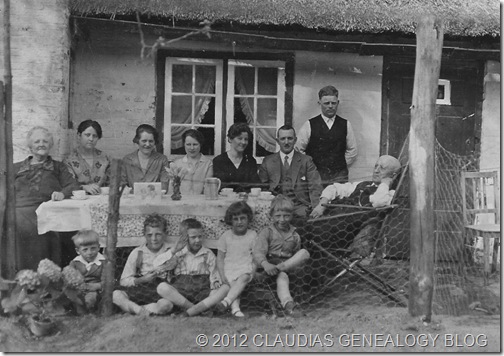 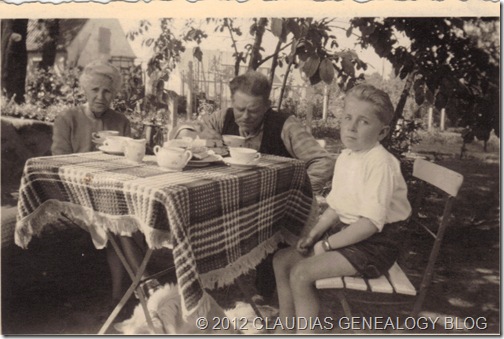 Pictures of The Claasen and Schridde Family.   From the Collection of Anna Bartels now owned by Claudia Sperl.
For my newly found cousin Laura.
Posted by Claudia at 1:44 PM No comments:

On the Easter in Germany in 1915, my grandmother, Anna Bartels, made her confirmation.   She is in the second row from the bottom, last sear on the right.

I checked my email on Friday and found a pleasant surprise.   I had an email from a cousin who found me by reading this very blog.   That was a  fantastic surprise.   Her grandmother was a sibling of my grandfather Thomas Dowd.

We have corresponded and are exchanging pictures and information.  The best so far is the fact that another  cousin of hers had sent her information of our Great Grandmother Bridget Naughton.   It appears that Bridget did indeed have an identical twin,  name of Katherine.  I found Irish records of Mary and Bridget but not Katherine.   I am now supposing that it was an error in recording.   On Bridget's death certificate it had listed Norah Nee as mother, but I had the Baptismal Record stating Thomas Naughton and Catherine Ward.    Did Catherine died in childbirth or shortly thereafter the birth?   I had a theory that Catherine had died and perhaps it will be proved true.

I had been searching for confirmation of a twin birth  since I have heard about it from my dad and another descendant of the original Dowd Siblings (my grandfathers brother John).     So off to the races with that one.

Also listed was a sister, Maria Downs, Norah Connelly, Margaret Naughton, and brothers Dudley and Joseph.  I had  found and researched Mary Downs in the records of the Archives of the Diocese of Pittsburgh.   Mary and her husband Michael are still an enigma.

Norah Connelly, Margaret Naughton and Dudley Naughton were listed as sponsors for the Dowd and Downs children in the records of St. Thomas RC Church in Braddock PA.   More research to be done to gather the information on the other five siblings.

GOT BORED WITH THE TEMPLATE

This morning, as I was recounting everyone's adventures with the 1940 census, I decided that I needed more color on my blog and I chose a new template.   I like a lot of color.   I have been searching for instruction on how to add your own picture, but even with a few tips from others I have not been able to do that.
It is operator error as usual.

My past month or so I have been searching for the father of  my husbands 3xgreat grandfather, Michael A Coleman.   My cousin has it narrowed down to a few choices.   It seems that there were four brothers, Thomas, John, James and Michael Coleman.  They lived in Blair County PA in the middle to late 1700's.

The Coleman Brothers were feared Indian Fighters.  This seems to have stemmed from the fact that the youngest brother(John) was tending the boiling of maple syrup while the other went hunting..  Upon their return the found that the local tribe had killed John by boiling him in the vat of maple syrup.   That was a very horrific death, and according to the printed readings the remaining brother waged war on the natives.   They were also Revolutionary War Militiamen.

Some sources stated that the natives would not even enter the valley where the Coleman brother lived, because of their fear of them.  My cousin and I are thinking that they are descended from either Thomas or James.   In the early census it is difficult to plot with just the names of the head of the household.  My goal is to eventually figured who is Michael A's father and which of the three Coleman brothers are his grandfather.

Old Thomas Coleman lived to the age of eighty five,  Michael was killed on the Ohio River opposite Ohio, while chasing the natives who had stolen four horses.  I have yet to determine what happened to James.  A trip to a Historical Society and Altoona, Blair County PA to look for documents is in order.
Posted by Claudia at 9:47 AM 1 comment:

WHAT I DID TODAY

It is not what everyone else is doing.    Today I went to do research at the Archives and kept busy looking for information of clients.    It seems every time a Genealogy related show is on the TV we can expect a huge influx of people requesting information.

That time is now.   With Who Do You Think You Are and the program on PBS with Dr Gates the envelopes are coming fast and furious. The hardest part of the job is I imagine that everyone thinks we have everything digitized and we do not have anything digitized.

We pour over records that can be up to one hundred and fifty years old.  A lot of records are missing due to a calamity or who knows why. The paper is old and ink can be very faded.

A lot of people do not do their preliminary research.  They will send a request stating their ancestor lived in XYZ County and can we find their records.

You really have to know where they lived and than perhaps we can narrow down the church they attended.  Like in real estate you have to know the location.

I missed the hoopla and frustration of  searching the 1940 census.  Searching every page line by line is not my ideas of fun,  in fact, I find it frustrating.   I will wait a bit and then see if I can tackle searching.   I have volunteered to do indexing and perhaps this week I will download a batch and get started.  Doing one page at a time is do-able.
Posted by Claudia at 9:12 PM No comments: