I knew my great grandparents came from County Galway, Bridget’s information from the LDS records and Thomas Dowd from his death certificate where it was indicated County Galway.   But his birthday was different from the one HE GAVE on his Marriage License application too. 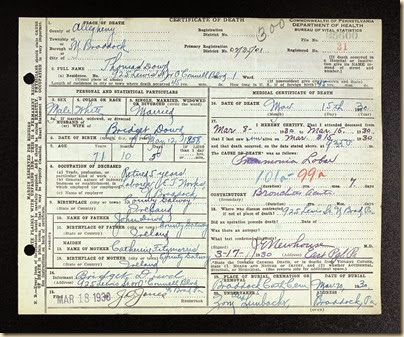 One day I was perusing CONNERS GENEALOGY site and came across a transcription from Glinsk Parish in County Galway.  I found Thomas Dowd, with his sisters Mary, Norah and Catherine as well as his parents John Dowd/Doud and Catherine Fitzmorris, and a brother James.  The dates on his Death Certificate and the Baptism Registry match.   But, why did they give different date and why did both dates match existing people of the same name living in County Galway living at the same time?

My biggest problem was the lack of Bridget’s siblings, I had a few theories; perhaps their mother had died in childbirth with the twins and Thomas remarried.  This was my best because the death certificates yielded the parents of Thomas Naughton and Norah Malloy, sounded reasonable to me without any other information.

On Bridget’s Death Certificate her son Richard had entered Thomas Naughton and Norah Nee, where did he get that name?  I just did not know nor could I figure it out. Allegheny County or the Marriage Records from St. Thomas did not record the names of the parents.

The last of this puzzle is why I could not find Catherine Naughton or her death certificate and where was she because my dad remembered her and he was born in 1918 and he remembered her so he would have been school aged at this time.

As the whole story ends it is because Catherine Naughton married a man named Patrick Naughton (no relation that I can find) and she was in the same town as all the others hiding in plain sight, as they say.

Posted by Claudia at 2:14 PM No comments:

It has been quite a while since I have written.   I have been reading how people are putting their research aside and “doing over”   The thought seems to be overwhelming but I only have been  researching since 2008 and I have about 1000 people in my tree, all of which should be there, or so I thought.

I had written a  post about my paternal great grandmother and why I could not find her twin in the records.   A fellow blogger, Dara of BLACK RAVEN GENEALOGY  found Bridget Naughton and her twin Catherine.  It appears that Dara (Thank You Dara) was correct.

How did I make this major mix up?   To start with I used the date of birth that Bridget had given on her marriage license application; I entered it on Family Search and amazingly I found her with the corresponding date of birth.  The parents were Thomas Naughton and Catherine Ward; so I was off to a good start; but the census records from 1900  to 1930 gave all various years of age.  This was puzzling but what I read this was not uncommon.  I also did not know she was a twin at this time because none of my cousins I had met did not know of this either.   A niggling problem was my father said his grandmother was a twin, and he could not tell them apart.

When I received the records from the Archives of the Diocese of Pittsburgh, I gleaned the names of many women and a few of them were also Naughton’s.  Then I did another search of the records, this took a few months into a few years because of the new names I found.

With the Archives records  and Family Search.org I found many of the names and they were her sisters and sisters in law.  One of my cousins, we found each other online, gave me the names of a few of Bridget's’ sisters; Mary, Norah, Margaret and two brothers John and Dudley.

None of the birthdays matched Bridget’s and where was the twin?   I was on to other people in my tree, mainly her husband Thomas Dowd.   I used the date or birth from his marriage license application  and found him on Family Search, but none of his siblings.  I was not worrying because Irish Research is suppose to be difficult.

Then just by chance I found the transcribed records of Glinsk Parish in Ireland….

Posted by Claudia at 1:39 PM No comments: