Insanity is doing the same thing over and over expecting a different result, which I am guilty of in my Coleman search.    I keep looking for trees and another information that would send me back another generation or two.

I looked for the census in Huntingdon County PA because other records indicated that was where Mary Ann Saylor lived.   A few Colemans’ lived there too.  Since I had paid a visit to the HUNTINGDON COUNTY HISTORICAL SOCIETY and found a family group sheet of an application to the DAR from 1921.

This tidbit of information Lists Thomas Saylor, his wife Mary Kercher and eleven children.   One of which is Mary Jane Saylor, born 21 June 1814 and married to Henry Coleman.  Which is the exact date of birth Mary Ann in the Coleman Family Bible. 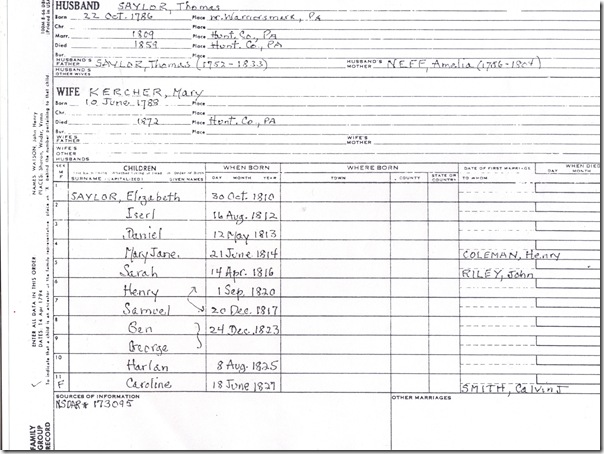 [Copy from the  Huntingdon County Historical Society, Saylor file—DAR application 1921.]
I searched the 1830 census and found Thomas Sailor, living in Franklin Township, Huntingdon County,PA.   The ages and dates all fit in with the Family Group Sheet above.   The only person missing is a  second daughter listed  in the under five slot.

Next I did a search for a Coleman Family and found one in Warriors Mark Township, Huntingdon County PA, and I found a few but one for Thomas Coleman seemed to hit the spot.   It listed one  male from 50-59, one woman 40-49, and one male 20-29.

I checked the census of the other Coleman Families and this was the only one that the three ages and dates I had that matched.  Plus Warriors Mark Township and Franklin Township are adjacent.   There is a gap in the mountain and Spruce Creek Flows between the townships.    I have more research to do but I feel pretty comfortable about this match.

I had an epiphany this morning and decided in 1830 people would most likely marry someone in their community or just down the stream.   More research to be done.  I am wondering if Michael's middle name is Henry.

After spending time perusing and searching on Ancestry I found the other under five female.   Her name was Nancy Saylor, born in 1830 and then married Samuel Wallace [1823-1866.]   Now I will search for the other siblings of Mary Ann/Jane Saylor.
Posted by Claudia at 4:40 PM No comments:


A few years ago, actually it was 2008, I had sent for some of the Sacramental records from my dads Irish Ancestors.  The request was sent to the Archives of the Diocese of Pittsburgh.

I spent a lot of time on the births and marriages of my grandmothers siblings.  But I did a great disservice to them and myself.   I suppose it was my novice ways and inexperience but now I know better and I have to mend them.

I found a obituary for Mary O’Rourke Rogan of New Castle PA.  She was married to Daniel Rogan and listed was Patrick O’Rourke (my great grandfather) of Pittsburgh.   It listed her parents as Denis and Mary O’Rourke (deceased) of Limerick and and a sister Mrs. William Collins of Limerick.

I also found a Joseph and Thomas O’Rourke the father of children Baptized in the 1880’s and 1890’s in the same parish.   My theory is that John and James are Patrick’s brothers, but are Thomas and Joseph too?    They could also be cousins,  I wish this parish had death records but they are missing until 1948 and the cemetery records are incomplete.

I have to give this theory a lot of thought and research.

I have to write some later thoughts on this subject.  Mary emigrated in 1871 and married in 1876.   Could she have married at St. Thomas RC Church in Braddock, which is where her children John and Daniel were Baptized?
Posted by Claudia at 5:08 PM No comments:

I found this link today on the NORTH HILLS GENEALOGIST PA  Facebook page, of which I am a member.  You will spend a lot of time here searching for US research.
Posted by Claudia at 8:32 AM 1 comment:

IRISH RC RECORDS TO BE DIGITIZED

Library seeks help to digitise collection    I can't wait to see this collection of Irish RC Records from Ireland
Posted by Claudia at 12:45 PM No comments: 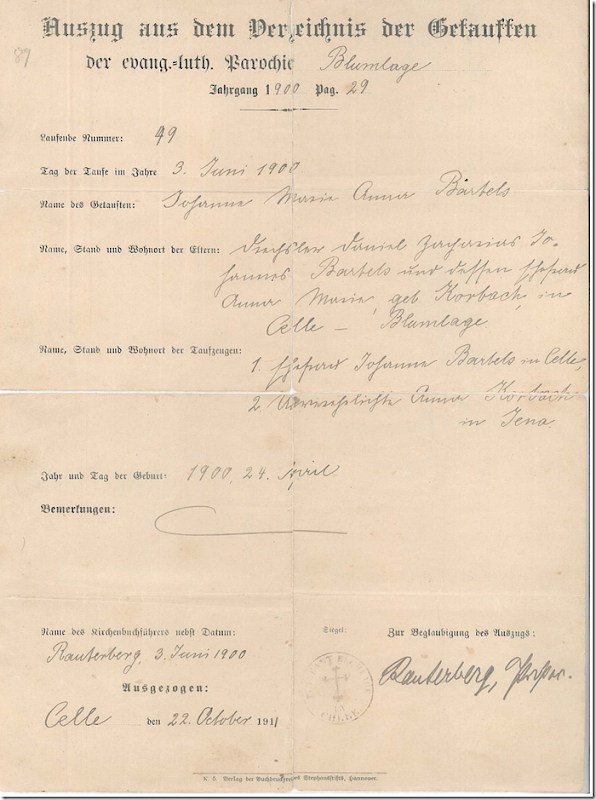 My grandmother’s Baptismal Certificate dated  3 June 1900.   Private collection of Claudia Sperl, granddaughter.
Posted by Claudia at 10:28 AM No comments:


I spent a lot of time in April, when the 1940 census was released, searching for my father, Thomas A Dowd. I could not find him even when I went page by page.  I knew he had lived on Electric Avenue, East Pittsburgh PA.

Yesterday I was searching for Allegheny County Marriage Records (Family Search) and decided to do a blanket search for my grandmother, Gertrude Graham.  POOF, she was where I had been searching.  What was I missing, it was a transcription error of the first letter of her last name from a G to a B.   So it was indexed as Braham and my father was there also but he was also listed as Braham and not Dowd.

My grandmother has remarried to Peter Graham after the death of her first husband Thomas Dowd.   It also had listed William Zentner as her son (really nephew, son of Gertrude’s sister Ann who died in 1937.)   Also was listed was Clara Graham, as daughter, who was really the daughter of her now deceased second husband Peter.

Moral of the story is not to give up and the information is only as good as the information was given and recorded.  The enumerator probably asked about children and not the names or biological relationships.
I did write a correction to Ancestry, so if anyone else searches years from now, the correction will be documented.
Posted by Claudia at 9:05 AM 1 comment:

If you are wondering when your ancestor photo was taken try this link.

You could spend a lot of time perusing these images.

I HAVE NOT POSTED LATELY


I seem to get lost with my research.  I have been able to trace the mysterious Downs Family.   It all started with the 1940 census (Newark NJ) which Ancestry found for me.   Which led me to the 1920 census (Newark NJ) and eventually the 1930 (Newark NJ) and finally the 1910 census in East Pittsburgh.
One would thing finding the name Downs would be easy, but it was not because of the handwriting and indexing.   Next question is when did Michael die?   Michael was considerable older than Mary Naughton, fifteen to twenty years.   The last knowledge of Michael was in 1896 with the birth of Josephine Downs.  By 1910  Mary was living in East Pittsburgh PA, head of household, age 47 and widowed  according to the 1910 census.

Living with her was her daughter, Mary Malloy age 25, her husband Dominick age 34, daughter Mary I (Ida??) age 3 and brother one month old.  Also living there were her daughters, Margaret, Sadie (Sarah?) and Josephine.

Plus innumerable boarders, ten of them in fact.  I am wondering how many of them were relatives?
What happened to Michael, where is he buried?   It lists Mary as the mother of eight with four living.  I know two of the four Catherine and Annie but who are the other two.  I suppose I have to search the records of St. Thomas, but if they were stillborn or died at birth they would not have a Baptism records and the deaths do not start until the 1940’s.

Why did they move to Newark New Jersey?   With most of your family living in Allegheny County PA why would they go there???