NEW, TO ME, PHOTO 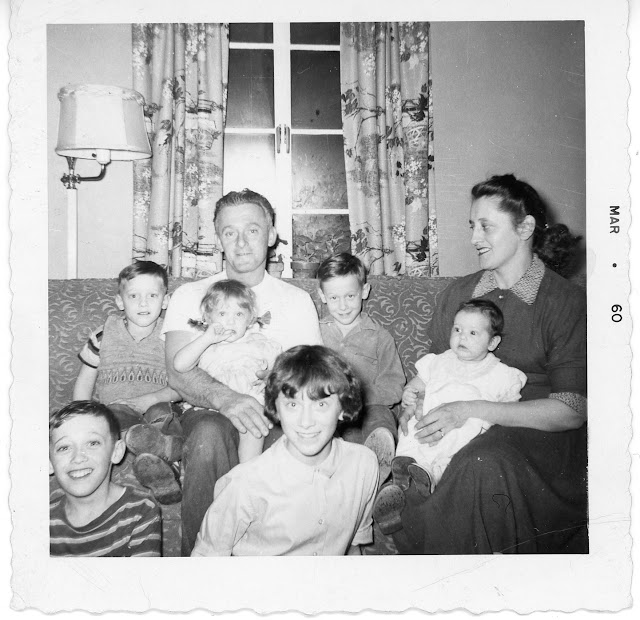 Here is a photo of me and my family.   The photo is new to me.  It was sent to me by my cousin Rick.

It was probably given to his parents by my mother or my grandmother; both of whom are long gone.  I wonder who took the picture,  I can see the reflection of a camera flash in the window.   I do remember that my dad had a timer on his camera, perhaps he set it and ran to his seat. I was thirteen at the time.
Posted by Claudia at 5:12 PM 2 comments:

This year at GRIP, they have two week long sessions and one week is in June and July.   You have to be quick with your fingers and on the website and ready to go immediately at 10:00

The first session I chose was RESEARCH IN WASHINGTON DC FROM AFAR.  There is so much to see in DC and I thought this would help me in setting up a time to go and research my husbands lines.

LaRoche College is about a forty five minute drive from my home, so it will be driving do-able.   I am really looking forward to this class.
Posted by Claudia at 12:20 PM No comments:

ANOTHER NEW SITE TO ME

I have found a wonderful site related to genealogy research.  PITTSBURGH POST GAZETTE ARCHIVES,  I have been a subscriber for one year and renewed again.   The reason is 99% of my ancestors move here and stayed.

I put in a person's name and then search,  what I have been searching for mostly are the OBITS.   Most are great and some are not there.   With this resource you have the capability to down load a snip or add the OBIT to Ancestry.   I have been working overtime on this site.

On the last post I had listed the Catholic Cemeteries of the Diocese of Pittsburgh link and just now had an eureka moment that why not Google every name listed in th that site in the family plots.  It gives the death year and this might be easier.
Posted by Claudia at 11:44 AM No comments:

My grandmother (Bridget Naughton Dowd) had a sister Mary Naughton Downs.  Sometime between 1910 and 1920 they moved to Newark NJ.   This has been a mystery to me for many years.  She was also a problem because, try as I might, I have not found them in the 1900 census.  I am sure they were living in the same place, but not in the census.

A few days ago I was looking at my tree on Family Search and found a few matches.  It appears that they were added more recently and the person did not have enough information for them to come up as a match.  That is what it appears to be to me.  I do not know how to go about merging the information for this double family.

Anyway,  what the woman did have was a little note that indicated that Mary Naughton Downs died in NJ and was buried in Pittsburgh, a s well as her date of death.  One of my favorite resources is CATHOLIC CEMETERIES OF THE DIOCESE OF PITTSBURGH.   This is a relatively new resource, just within the past year or two.

I remembered I had a old document from the WESTERN PENNSYLVANIA GENEALOGICAL SOCIETY.   It was the death of one of Mary's daughters Rebecca who was born and died within four days in 1895 and the place of internment was St. Mary Cemetery in Pittsburgh.  So with that information I went to the Catholic Cemeteries and there I found the family.  This included Mary, her husband Michael, infant who died in 1895, a daughter Hannah who died in 1901 (I had no knowledge of Hannah, and two adult daughters Margaret and Sadie who lived with their mother in NJ and were buried in the family plot, included with the dates of their deaths.  I know now I have the correct Mary.

A married daughter Mary Downs Molloy also had her date of death in 1929 and where she was buried.   In the 1930 census the two children of Mary and Dominic were living with their grandmother in Newark.    Also indicated was the death of Dominic in about 1975.   My theory is now he was unable to care for the children and Mary Naughton raised them.   But why, did the two families move to NJ, was Mary Molloy sick and Mary Naughton move to take care of her daughter.

I sent an email to the woman who posted the information but have not heard back as of today.

The Naughtons have been difficult to find, at least for me.   Initially, all I knew was my great grandmother was Bridget Naughton and she had a identical twin.    That information was given to me by my father when we were discussing his family

It took me a few years to sort this mess out.  Erin, a cousin had  given me information on Bridgets sisters who were here in Pennsylvania.   I had only heard about the elusive twin, but  I did find the sisters Nora and Margaret, plus the elusive Katherine who was the twin.

My biggest help in finding them was when the death certificates for Pennsylvania were released.  I found Katherine and the biggest obstacle to finding her was the fact that she married Patrick Naughton, her maiden and married name were the same.  The death certificates listed a different female as the mother.  Plus I could not find the twin in the Irish Baptisms.

The difficulty in finding this family was the fact that Bridget and her husband, Thomas Dowd,  gave the incorrect birthdates when applying for their marriage license.  Was this intentional or a mistake?   I did find two people with the exact names and birthdates on Family Search, at this point in time I don't think I will find the answer to that question.  After resolving this matter I was able to find the correct parents for Bridget.