As mentioned in my Blog latest Blog post I have set up a photography-geneblog.  FOUND AT AN AUCTION  is its name.   Setting it up is still a work in progress.  I had linked it to my Live Writer Account and now I can not access my old blog accounts, so I have to work on that.

I also found that my old Photoshop will not work on my new computer, so I guess I have to work on that too.   I search the forums of Photoshop and there does not seem to be a patch for that old program.  Actually it is PS 3 so I guess a new one is in order.
Posted by Claudia at 8:35 AM No comments:

Or at least it will be when I find the relatives of the  box of pictures I found at an auction.     My husband went to a auction in Cheswick PA.    He purchased a small piece of furniture and the auctioneer threw in a box of photos.

There are some old ones and the rest are from the 20’s through the 50’s.   I found a picture of husband and wife and their names were on the back.

I checked for the family and I did indeed find them in the census in Darke Ohio.   Even better I found a man had posted a family tree with this information.   Buy this time I suspected that the couple in my picture was the family I had found due to the woman's unusual name of Calista.

When I read his tree he had a lot of pictures and he also had the very same one I had in my hand.   His picture appeared to be a copy of a newspaper photo.

What I will do is scan, make a folder and then see if he wants them.   Is there anyone out there who would not want to be contacted and offered a collection of photos that included your ancestor?

I have to get busy on that project and I thought that I would mail him the whole bundle if he is interested.    From the amount of photos I think he likes pictures.

I am hoping that some day a person will contact me and tell me they have found a picture of Thomas Dowd and Bridget Naughton and the children and would I like a copy…..I would walk to go and pick it up.

Posted by Claudia at 6:41 PM No comments: 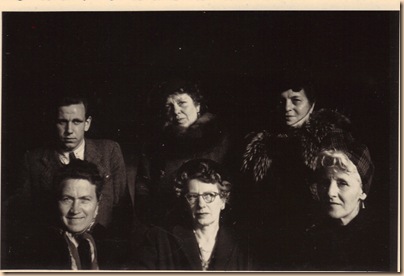 What was the reason for this picture?

EUREKA, I REALLY FOUND IT…..

As I had planned Chuck and I stopped at the City-County Building in Pittsburgh.

It only took about 10 minutes and now I have the answer.    I found the parents of Olive Bowser and as I had suspected, but now I can PROVE it.  Her father was Jacob Bowser and mother Mary Murphy.   Olive was married on 6 June 1914 but the Justice of the Peace C.B. Milligan at 1334 Federal Street, North Side, Pittsburgh PA.  At the time of this marriage both of Olives parents were deceased.

I have to take a drive back up to the Armstrong County Genealogy and now gather up more information on the ancestors of Jacob and Mary.

The Bowser Family is well know in Armstrong County PA  In fact the original Matthias Bowser SR. came to the United States somewhere in the early 1700’s.

They were German Swiss and I can go back about four or five generations that have already been documented.

I took Chuck with me to do the research.  Olives name was misspelled, it was Stephens but listed as Stevens.   He wanted to know if I was certain and why would it be spelled wrong.   I just laughed.

Her husbands name was Oswald Rauhut and how could anyone not know that this was the same couple?  Even in the 1900 and 1910 census the names was spelled Stephens in one and Stevens in the other.

I am so happy because I have been searching for the documentation of Mary Murphy for about two years.

SUNDAY AND WHAT TO DO THIS WEEK

This has been a slow genealogical week for me…..On Tuesday I went to a meeting of the NORTH HILLS GENEALOGISTS.   I was so surprised that they had a great meeting.   I had joined this group earlier this year but with winter and working I did not get to go as it is about an hour drive from my house.

The topic was on German Genealogy and I have to put my plan into action.    There is also a beginning German class and I would like to start learning German.  It seems that there is a beginner, medium and advanced class.

I asked my sister if she was interested in going, she will let me know.    I will see if Chuck is interested in driving there.  It is at the PENN BREWERY and he could have dinner and a brew while I am in class.

This week I also did my volunteer work at the Archives of the Diocese of Pittsburgh.  I was searching the records of St. Michaels, which was located on Pittsburgh’s south side and know then as Birmingham.   St. Michaels was  a German Catholic Church and the old records are written in German in the old German Script, I am getting better at reading the old handwriting.

What struck me while searching the death records was the extremely high number of children and infant deaths.  It seemed to me that this group comprised about 75% of the deaths.   Really, how sad was that?   I knew that there were a lot by this actually surprised me.   There were also a number of women in their 20’s who had also died, and I have a suspicion that they died in childbirth.

The current c-section rate is now about 25% and that is about the same number of women who died in childbirth at that time….

My goal this week is to go to the Allegheny County Courthouse.   Chuck has an appointment in town and the Batman filming is over, so I mentioned to him that I would like to stop and look for the records of his great grandmother Olive Bowser.   I am hoping that when she married the second time it was in the timeframe (1914) that the name of her parents was required.    But, the way things go for me on that line I am prepared that the information will not be there……Tuesday is another day……….

Posted by Claudia at 8:33 PM No comments:

I REALLY SHOULD HAVE KNOWN BETTER….

I have been agonizing and really frustrated by the lack of information on Olive Bowser Stephens and her parents Jacob and Mary Bowser of Armstrong County PA.

Today out of the blue, I was looking in my Bowser folder actually, it suddenly struck me……..Olive’s second marriage.   She was married in 1914 and in Pittsburgh.   At that point in time the parents names were required on the marriage license applications.   Why did I not realize this a year and a half ago.   Why did it take looking at her second husband, Oswald Rauhut’s immigration papers to finally figure out to look at their marriage application.

I will go to Pittsburgh and look it up as soon as the Batman filming is ended and all of those filmmakers and actors have gone.

Has anyone else done something incredibly off the wall like that, missed something so obvious in their research?  I feel like a complete idiot over this basic record. 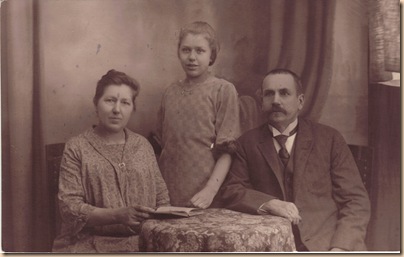 Posted by Claudia at 2:26 PM No comments:

We perused many antique stores and what I saw in one store was amazing.   It was an old photo album, with pictures from the late 1890’s and early 1900’s.   The most amazing this was that 90% of the photos were labeled.   Someone took the time to write, above the photo, the names of people in the photographs.

I would have purchased it but the cost was $60.   What a treasure to find if it were your Family.   The person who took the time to write a Who’s Who deserves a genealogical medal.

I was in a shop in SYLVANIA PA  which is in the Northern Tier of Pennsylvania and in Western Bradford County.   The  people  were the Reynolds and Willis families.

So, I decided to make a post and list the place and families in case anyone would happen to find the link to my blog.

Posted by Claudia at 9:24 AM No comments:

Before I could select a day I made an electronic visit to St. Luke Cemetery. 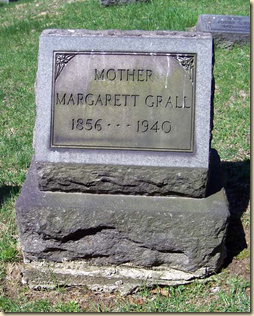 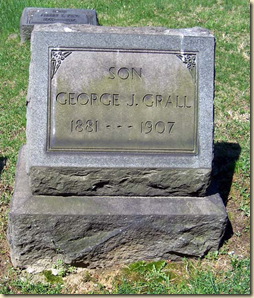 Photos taken by Rich Boyer and courtesy of Allegheny County Gen Web Archives.   I had been looking for George I the 1910 and 1920 census and now I know why I did not find him.

It is amazing how some people are easy to locate and others are virtually impossible.   I also sent these to my Aunt Edna.  I am thinking that the elder Phillip emigrated to the USA circa 1850 to 1855.    On one census it is documented that the son Philip was born in Pennsylvania and one in France.

Posted by Claudia at 7:36 AM No comments:

OUT TO LUNCH AND RESEARCH FOR AUNT EDNA.


My husbands elderly (89) Aunt invited me out to lunch with her and her daughter yesterday afternoon.   I have been sharing with her my trials and tribulation on finding relatives.   Her husband was my husbands fathers brother.    She was the person who told me that the elusive Olive Bowser died on Christmas Eve in Salem Ohio.
After lunch she asked me if I could do something for her.  She wanted to know where her Great Grandparents came from.   Aunt Edna had given me some preliminary information.   She said that her grandmother could speak French and German and in fact Edna had studied French in High School so she could practice speaking to her grandmother.
I accepted the challenge.   She had written that her great grandfather was born in 1825 and died in 1886.  Phillips wife was named Barbara.   Checking the census was the number one thing to do.   Fortunately the couple  came to the Pittsburgh area and stayed there.
What I found on Ancestry was  1)1860 census was Philip, Barbara and son Philip.    2) I found him on a list of eligible to fight in the Civil War list.   I do not know if he did serve.  3) 1870 and 1880 census.   All were saved by me on my computer and in my Ancestry Shoebox.
Next I searched on the Ancestry Family Trees and found two with people who were researching the same couple.   I now had Phillip and Barbara’s dates of birth and death.    There was no citation so I sent the owners and asked where they got their citations.  As well as their dates of birth and death I now had Barbara’s maiden name and the places where they were born in Alsace-Lorraine France, complete with the towns listed.
The last of my find was a note that they were buried at St. Luke Cemetery.   Now there were a few St. Luke Cemeteries and I chose the one that was the closest to where the couple lived.    St. Luke near Millvale Pa is a small cemetery and it is kept up by the Lutheran Church in Millvale PA.
Some wonderful soul had indexed the cemetery and it has Aunt Edna great grandparents, grandparents and some of the siblings of Edna father.   I was so happy that finding this information was a breeze.  It actually only took me a few hours time and the research was quite fruitful.   I hope Aunt Edna is happy…..
The index stated that they had grave markers, so I see a trip to ST. Luke Cemetery in my future.
Posted by Claudia at 6:50 PM 1 comment: