I have to admit that the class of German records and writing was GREAT. This is actually the first class I have attended so I hope I am not dissapointed with any others.

We really did not go over Fraktur, but rather he showed us the type when used in a lecture of American German Newspapers. I can read the small letters but the capital letter will take some getting used to.

Donna, I tried to leave a comment and it kept telling me to leave a valid email address and I had but it still would not publish. I have photo editing software and I did not know about the print/alt button. Guess it was one of those things on the keyboard that I never paid any attention too. There are a few others that I am clueless about. I will have to play with it and see what I can do. Thanks for your help.

The teacher, John T Humphrey CG was very informative and held my interest for the two days. He included a bit of German and American History which gave us insight to the conditions of the time and why our ancestors left.

I was glad I took the class, now I have to act on his information.

Posted by Claudia at 7:06 PM No comments:

This weekend I am attending a two day class on reading German Script.

It is proving to be great.   What we covered is Sutterlin and Kurrent.   We can now read the letters when printed with much accuracy but, as with any cursive writing, it is difficult with the variations of penmanship.

Tomorrow we will learn Fraktur.   My Mutti had a Fairy Tale Book written in Fraktur, so  perhaps I can read it, or at least identify what is written.

What I found on reading some of the old Church records is that there is a combination of styles in some of the records.   Some of the letters are Roman Script and some German Script.    The Roman letters are no problem.

After this class I (hopefully) will be able to read the old records, or at least give it a shot.

Since my last entry I posed my question to the PA ALLEGHENY COUNTY ROOTS WEB and a kind soul, Larry found them in the 1910 census.

Why I was wrong, John was listed as Robert. I do not know if he went by Robert or John, or John was someone else and I was chasing a wild goose with that name.

Anyway this is a great discovery. His wifes name was Olive. Olive and Robert were married in 1891. It appears that Robert was twenty five years older than Olive. There were four children listed, James b. 1894, Irene b. 1896, Mary 1900 (my grandmother in law) and Leonard b. 1903. The surprising thing was that I had not known about Leonard.

And on the 1900 census I also found them but the name was spelled Stevens instead of Stephens. 1900 listed the immigration year as 1862 and also in living with them was a brother James Stephens who was born in Kentucky.

Another person (Bev) on the Roots Web list had given suggestions on many sources to search and a third (Donna) suggested to contact the Genealogy Department of Salem OH, which is in Columbiana OH. That is close to Pittsburgh, so I think a day trip may be in order. Donna said that the library in Salem has a large Genealogy Department.

These ancestors are proving easy to find if you only know their names and where they live.

Posted by Claudia at 5:36 PM No comments:

Did you ever come to a mystery that you can't solve? I am still looking for the Stephens Family in Allegheny County PA. My grandmother in law, Mary Stephens was born April 1900. Her sister Irene was born about 1896. There was also a brother and I do not know when he was born or when he died.

They lived in Allegheny County PA, I can find Mary And Irene after in the 1920 and 1930, after they both had married, so why can I not find them earlier?

This is proving to be a challenge, I guess I will have to pose the question on the Allegheny County Roots Web list. They are a great group of people who seem to be able to solve problems and help everyone.

This mystery is making me a little crazy, I do not think it is a brick wall, just a load of bricks on my pathway.

John and Mary wedding photo, 1918 and sister Irene and Johns brother standing. Do not know which one, it is either Charles or Joseph. I will have to ask Aunt Edna.

Posted by Claudia at 4:33 PM No comments: 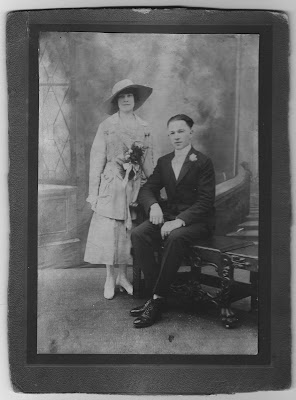 I talked to Chucks Aunt Edna again. We are going out to lunch a Sunday in September. What she remembered is that Robert Stephens was Mary Stephens Sperls father. He is buried in the Civil War Plot in Uniondale Cemetery. Edna also said that Marys brother Jim is buried there too. I read her some of the names with the John Stephens but she did not think any of them were familiar.

But, Chuck said (according to his father) that there were two uncles who were Civil War Vets. Jim Stephens was born somewhere 1890-1900 so that would not be him. He could be there too, I have to do more work on this line. I am thinking that Johns could possibly be another Stephens Family brother. He also had daughters named Irene and Mary.

I have a picture of them from Marys Wedding which was 10 April 1918, at St. Anthony's Church, Millvale PA Irene and Ed Scheuring pictured above, c,1918.

She did not remember what Mary Stephens Sperls mother's name, but she did remember she was buried in Salem OH. I asked her if the parents were divorced and she said "no" Edna thought that the mother went to live with the daughter after the death of her husband. That daughter was Irene Stephens Scheuring, I found her living in Millvale PA close to her sister Mary Sperl. So, MY THEORY is that UNK mother died in Salem OH between 1913 and 1920. In the 1930 census Irene and Edward were living in Millvale PA, which was close to her sister Mary Stephens Sperl.

Irene died in 1957 and Mary in 1986, they are buried in St. Anthony's Cemetery, Shaler PA. Their brothe Jim had died early because Mary took in his son, Jimmy and he was about eight or so at the time.

Posted by Claudia at 2:10 PM No comments:

WORD OF THE DAY

Definition: (1) The originator or original ancestor of a line of descent, a direct ancestor; (2) the founder of a family; (3) the originator of anything, a founder, as the progenitor of a philosophical school.Usage: A progenitor produces progeny, the descendants of a single ancestor (or pair thereof). Back when English was allowed to distinguish between males and females, a female progenitor was known as a progenitrix (plural "progenitrices"). The state or stature of being a progenitor is "progenitorship" and the adjective for this noun is "progenitorial."

Suggested Usage: The white families who claimed President Thomas Jefferson as their progenitor were recently confronted by black families who claimed (with reason) to be the progeny of the same man. Jefferson was certainly one of the progenitors of our system of government. While Jews and Christians hold Adam and Eve to be the progenitors of all humankind, it is certainly true that we are all progeny of one couple at some point way back in prehistorical time.Etymology: From Latin "progenitor," the noun of progignere "to beget."

This word is based on pro- "forward" + gignere, gen- "to beget," containing the same gen- that we see in "generate," "generation," "gender" and "genus." It appears without the vowel all but hidden in "pregnant," from the Latin word meaning "before giving birth." In English this root became "kin," also seen in "kindred" from Old English cyn "race, family, kin" but also "king" from a time when ruling had genetic connotations. "Kind" originally meant pretty much the same thing as Latin "genus," so it should come as no surprise that they both derived from the same Proto-Indo-European root word. –

This word appear on my "Word of the Day" list and I thought it was very applicable to genealogy. We have many progenitors that make us what we are today.
Posted by Claudia at 8:03 AM No comments: