After my addendum to yesterdays post (in red) I decided to do a search and see what I could find.
The first is a digital collection from the University of Pittsburgh, entitled  SMOKE CONTROL LANTERN SLIDE COLLECTION  A few lines under the picture is a link that allows you to View Slides.  As you go to the collection, click on the individual photo and there will be a link entitled DESCRIPTION.   This will tell you about the photos.
The collection shows pictures from 1930 to 1940; you can see a diminished sun in some of the pictures that were taken during the day.
THE SMOKEY CITY 1945
PITTSBURGH HISTORY SERIES WQED
PITTSBURGH'S DARK HISTORY
PITTSBURGH SKYLINE TODAY
Posted by Claudia at 9:54 AM No comments:

I have been using the new mapping website I had posted about earlier this week.  This was made in conjunction with the University of Pittsburgh.  I am thankful I have found this website.  I think this will help in finding families and be useful to see what is near to where they lived.   For me I have been searching for the ethnic churches and perhaps you can find where they may have attended.

It has a space at the top right where you can put in an address (your ancestor for instance) and then click on the various years to see how things have changed.  On the top left is a vertical bar that you can use to enlarge the picture or make it smaller and then it will show more of the community.

In the bottom right is a small box that will bring up a snapshot and it has a rectangle box that you can more about and it will follow it on the large map.  They maps are overlaid and you can click through the years, on some of them they will have a shadow from the previous map so you can follow what was there previously.

On some of the maps are located little gold "push pins", you can click on them and information about the location will appear and an external link if there is more information.  I have found these maps absolutely mesmerizing and fascinating.  I will demonstrate with the confluence of the three rivers 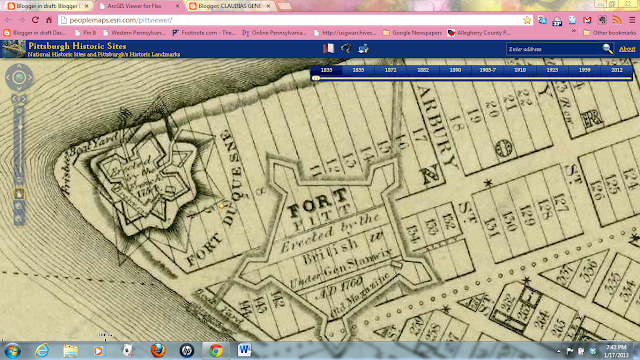 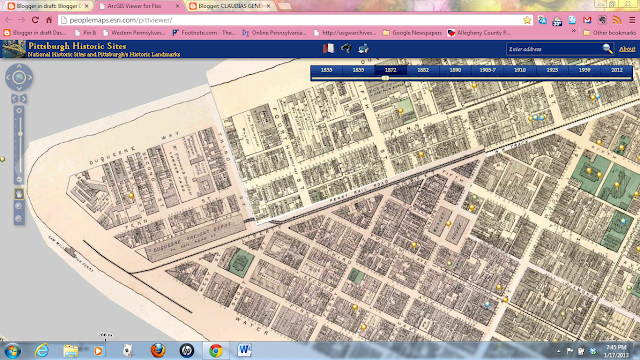 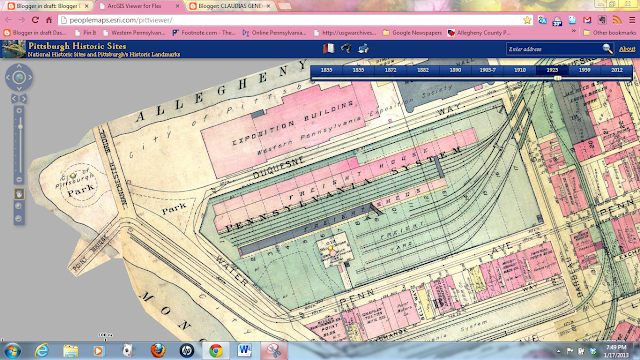 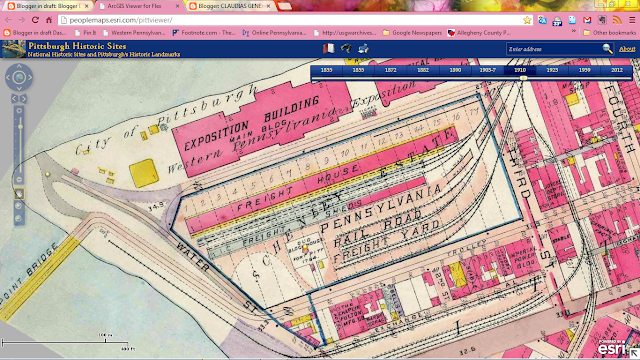 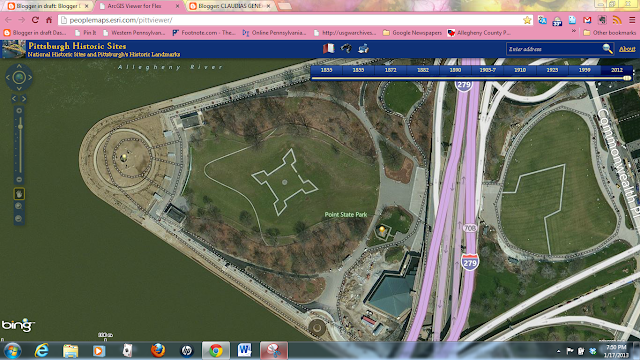 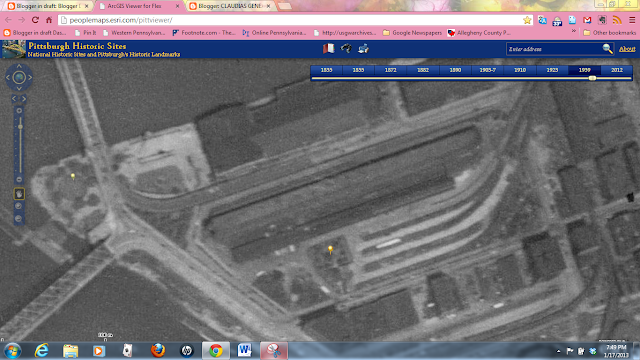 After posting the picture of Pittsburgh 1939 I thought that my initial impression of the poor quality of the photographs may be incorrect.   I had to consider the time period, it was before pollution controls.

Although I have never seen the city full of pollution I have seen pictures of it.   My mother said that the city was so dark with the smog and the grime that the street lights would come on during the day.

With that thought I am thinking that perhaps this was taken and it was the best that could be.  I will search for images of Pittsburgh before pollution controls.

I just heard about on the news on KDKA.   I haven't explored it yet but the gist of it is to show you what was there and what is now.
Posted by Claudia at 8:34 PM No comments: 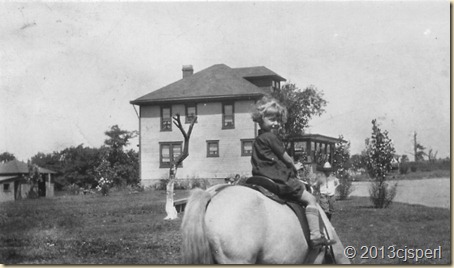 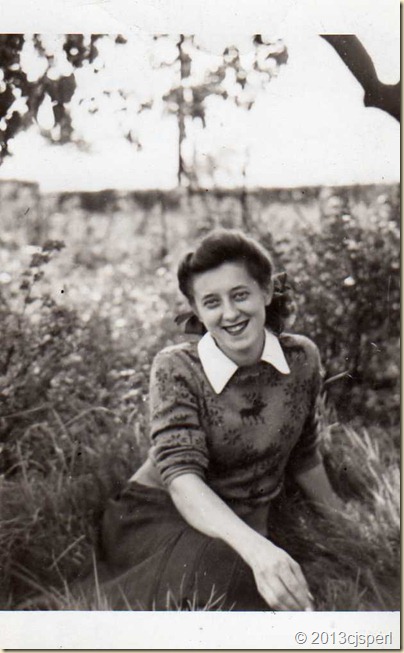 So, what am I thinking now?   This side of my family has me puzzled and there is no one left to question.  When they were alive there were no questions.

The scant information I have about them is they were from County Limerick, Ireland.   This has yet to be proven and believe me I have searched.  I found this in Obits and birth and death certificates.  I was perusing the death certificates today and was rather surprised about the length of some of them.   I would have gotten tired reading before I came to the end of some of them.

Actually, I think I will write my own Obit with a note that is the one to be published.

Not to long ago I came upon an article (not cited and now I can not find it) that most of the O'Rourke lines were from County Leitrim, it is near but not adjacent to County Limerick.   Where to go for information now?

Last evening I started my search (now bookmarked and saved, I eventually learn)   Why would the ancestors say Limerick on their records.  Were they born and and grew up in Leitrim and then moved to Limerick?   I have to form a plan and write a research report on this new thought about the O'Rourke information.

Posted by Claudia at 2:58 PM No comments:

It is easier to be organized if you start it at the beginning, which I did not do of course.  When I started a few years ago I was collecting and downloading but did not really know what sort of organization I needed.  I also did not know what documents would prove to be important.

I do have a back up system but that needs to be organized too.   I would like to do away with paper but I am reluctant to let it go.  Mainly I worry that no matter how many backups I have, in various places like Dropbox, Evernote and Google Docs, I fear that they can, somehow, disappear in to the electronic void.

I have to work on that and devise a system that works best for me.  I have read many articles by various authors on how to and I think I will take a bit of each and devise my plan.  But the problem is which will work best, I guess it is just trial and error.

I have started culling my bookmarks,  some of them are dead and some of them I can easily find with a search.   The small and unique ones and those hard to find will make their way into a folder that I can find with ease.  This sounds easier that it will prove to be.   I will allot some time every day to get started on these projects.
Posted by Claudia at 9:41 AM 1 comment:

I am glad the Holidays are over.   I spent two weeks being sick with a cold and bronchitis, but thanks to Zithromax I am feeling 99% better.   I just did not have the energy to do a post.

I have been reading everyones resolutions or their plan for the next year.   I decided what I would like to do:

I think this is enough to start with for one year.  I can add or edit any of my goals.