For the past five years I have been trying to figure out when did my grandmothers brother Dennis died.    I found his Baptism in the St. Thomas Baptism Register in the Archives of the Diocese of Pittsburgh.  He was born 28 October 1875 in East Pittsburgh PA.  My grandmother Gertrude always said “he drowned in the river”
While looking at copies I had in my possession I was reviewing the delayed birth certificate of my Uncle William and  grandmother Gertrude O’Rourke.  They are the only of the siblings that I knew.
The answer was sort of sitting there all the time. 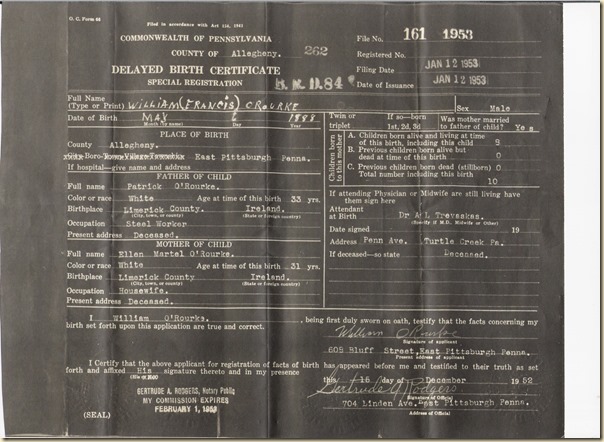 At the time of my Uncle Bills birth, 6 May 1888 he was the tenth child born of Patrick O’Rourke and Ellen Mortel.  The older children I knew about were Anne, Dennis, James, Mary  and Thomas.  Who were the other three?   This means that Denis was alive as of 1888 and he would have been thirteen at the time. 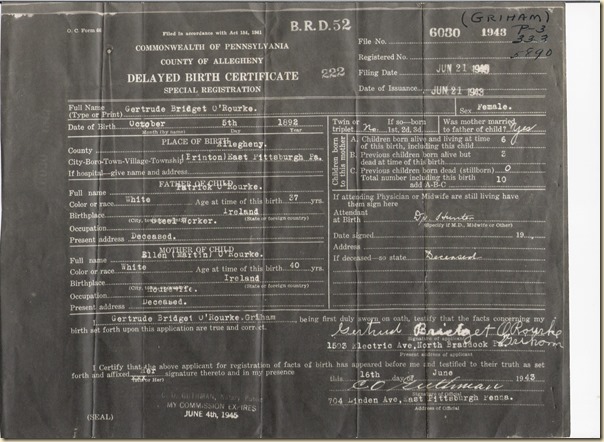 By the time my grandmother was born there were six children living and three had died.  Can I assume Dennis was one of them?  There was another sister born 18 May 1890 who was also recorded in the Baptisms of St. Thomas RC Church, Braddock PA.   In my grandmothers birth/Baptism record  her name is recorded as Bridget Gertrude.
In 1888 there were a total of ten children, including William but not including my grandmother and her sister born in 1890.  I can account for Dennis but who are the other two?  Who are the missing children, it seems there are some unaccounted for and I do not even know the correct number.

So, when did he die?  My theory was and still is that he died in August of 1891 because that was when Patrick bought the plots in Braddock Catholic Cemetery.   A person, especially a poor one, would not buy a cemetery plot if he did not need one.

The funeral records from the churches  foundation up until 1945 do not exist for St. Thomas, and the cemetery records for the same period are non existent also.   I need to recheck the cemetery to see if they have a list of who is buried in the plot.
Posted by Claudia at 11:03 AM No comments:

UPDATE ON MY ACTIVITIES

After two weeks, and months before, of hard and intense work we had the house in tip top shape and listed. The house looks great and after five day we got a good offer. There is still a house inspection due and the closing is set for the end of May, I hope all goes well.

The cats are still growling and hissing at times, but no blood has been drawn.  No fighting no biting and that is good.  We now have to start to pack and get ready for the move.

It makes me wonder how in the world our ancestors, a lot who seem to move all the time, did this with regularity.  I theorize they had much less stuff and it was a lot easier, plus a lot of them rented so they did not worry about selling a house and buying a new one.

Did they have realtors 100 years ago and how did one go about buying and selling a house at that time.  Where did they advertise?   I think I shall research this question and see what I can find.