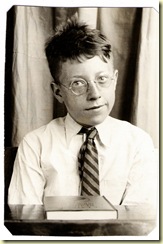 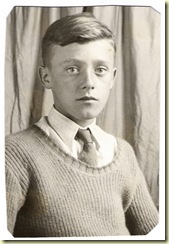 After writing about my father and his brother I decided to show pictures of when they were in grade school.   The boy with his hair askew is my Uncle Richard and the neat, tidy lad is my father Thomas Dowd.    My grandmother Gertrude held Thomas back two years so he could start school with Richard.   They would walk about two miles from the community where Gertrude lived with her parents.   She was a widow at that time.   My father said Richard would stall and they would always be late for school.   Thomas would not hit Richard because Richard would tattle and tell him mother.

One time Thomas did not wait while Richard was dallied behind and was late.   Thomas said that he was sitting in the classroom when the late Richard arrived,   Richard walked up to Thomas and smacked him on the head.

The Sister told Gertrude “Thomas has the patience of a saint.”  I think Thomas might have gotten even later.