I am still trying to work out the bugs on this picture posting.   I want to put the pictures of my grandparents side by side, but I can not seem to achieve that design.   I guess I need a tutorial on how to  do that.

This is a picture of my grandfather Thomas Dowd holding my father Thomas Anthony Dowd.  My father was born on 26 July 1918.  His brother Richard Regis Dowd was born two years later.

They were the only two children my grandmother had because in November of 1921 my grand father died in an accident.   My grandfather was about twenty six in this picture.  He worked on the Union Railroad in East Pittsburgh PA.

I wonder who took the picture and who was the lady standing in the doorway. 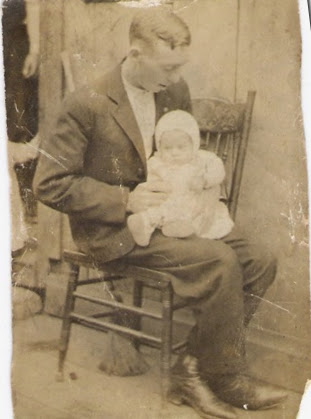 This is a picture of my grandmother Gertrude O’Rourke.  She is probably twenty six in this picture.  After my grandfather died she moved back home with her parents.  Things must have been really hard for her  at the time, actually I think things were hard for her all her life.  She had only complete five years of school, and she said she would go to school but she played “hooky.”   I wonder what she did all that time?   Guess they did not have any one check on them.  At ten years of age she would not have gotten a job, at least I do not think so.