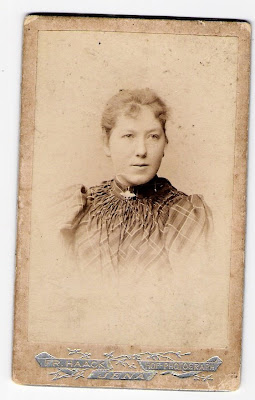 This is a picture of my great grandmother, Anna Maria Johann Korbach. On the picture is says Jena, and on my grandmothers birth certificate it gives the place of her birth as Jena. Jena is in Thuringa, Germany. I have requested the Church records from the LDS Church for that city. I think she died some time about the early 1960's. My grandmother, Anna Bartel, had a picture of the grave, but I could not read it even though I had enlarged it with my photo editing software.

I keep trying to add a later picture but it won't put the picture where I want it to go. Guess I will have to post this and start another post. My grandmother Anna would send pictues of her grandchildren to her mother Maria, I guess there are a lot of pictures of my sibs and I in Germany with people wondering "Who are these people, not one put their names on the back?"

Maybe they ended up in some antique shop where people wonder about them. I know I do when I find a box full of old pictures. Who were they, where did they live, and what was their life like??