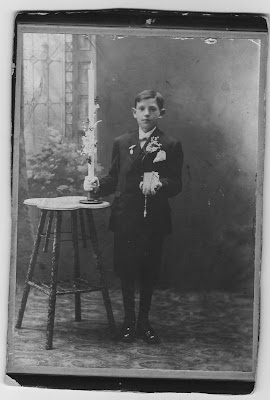 This is the third entry. I do not intend to number them all. I started out yesterday with the purpose of cleaning out the basement. It looks like it should belong to Sanford and Son.

About ten years ago my husband was cleaning out the family house in preparation for its sale. He brought two portraits that were stored in the bedroom closet.

I came upon them again. One was a portrait of a man and one of a woman. He took off the back of the mans portrait and it was dated August 23, 99 (1899) I know for a fact that Chucks great grandfather Anton Sperl died August 9, 1899. Chucks grandfather was born in May of 1899, so I think that Antons death was unexpected. The womans picture I am thinking is Antons wife, Katherina RAUSCHER Sperl.

My theory is she had the picture done (Looks like charcoal) from a photo after his death. Then had one of herself too. Katherina lived until 1947.
A few years after Antons death she remarried Joseph Nosseck, I have to find the documentationo that. A person on the RootsWeb site said that pictures were not enlarged at that time, and people would have a drawing made from the small photo.

I have to take a digital picture of the two photographs and them keep them in my photo file.
Photo John Crist Sperl b.1988. First Communion or Confirmation. St Anthonys Churck Millvale PA
Posted by Claudia at 2:44 PM